Common Problems with AI and ET 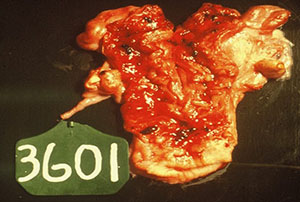 Frequently I have heard of artificial insemination (AI) technicians claiming higher pregnancy rates when semen is placed in the uterine horns. However, a study (Can. VET. J. 1965) reported that AI technicians frequently deposited semen in the wrong horn. For example, when the left horn was selected only 14% were correct; and only 48% were successful on the right horn (they must have been predominantly left hand palpaters).

A more recent study (Therio.67,754-759) confirmed the earlier work when semen was deposited in the body of the uterus, the horns, or by surgical techniques at the junction of the uterus and oviduct, there were no significant differences in pregnancy rates.

In conclusion release the semen just after passing through the cervix as you were probably taught in the first place. As I have said before embryo transfer (ET) unfortunately does not always work even when everything has been correctly performed. This is not surprising when considering the reproductive system is a "luxury" system, the first to stop when something else is wrong. As you know nothing is 100% in the biological world, for example two vaccinations are given to prevent or mitigate disease, the second vaccination covers failure of the first attempt. Which leads to another point, people often report very high success rates with their embryo transfer work. A recent international survey reported an average collection rate of 6.2 transferable quality embryos. However, when studying the individual claims some groups reported a collection rate of 10 of more embryos. The only way this could be accomplished is by only flushing previously known embryo producers. A realistic figure would be around 5.8 transferable embryos. We reported several years ago an average collection rate of 5.4 over 2,500 collections predominately beef cattle of all ages and dispositions. When considering recent results, the hard-earned experience of cattle breeders has resulted in the improved selection of potential donors likely to produce embryos that are useful. When hard to believe results are quoted it is judicious to ask how did they calculate these figures? For example, see table 1.

Table 1 demonstrates varying results depending on how they were reported. This of course refers to many observations in life where exaggeration is common e. g. TV advertising. We need to remember when manipulating the reproductive system, we are running 21sst century software on hardware last updated some 50.000 years ago.